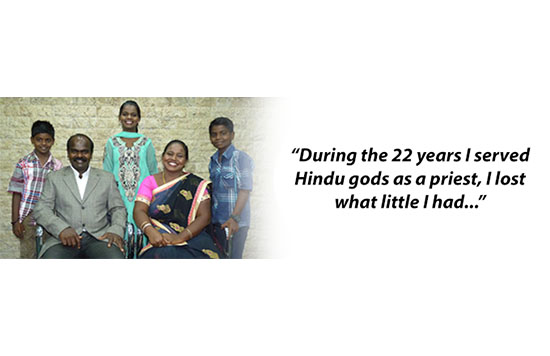 My name is Venkatesh, I am 42 years old and live in Chennai, India. I am married, have 3 children and live well today, thanks to the living God that the Universal Church introduced me to.

But it wasn’t always like this. I was born in an Orthodox family, where I grew up devout to my religion and gods. In my adolescence, this zeal was much stronger and I became a fanatic, extremely devoted to my beliefs. My father and I decided to build a temple to a goddess named Karumaari or Maaththamman, and spent a good amount of money in the construction of this temple.

Every year in July, which we call the month of “Audi”, a special month for the “goddess” Amman, I did something very special for this “goddess”, where I decorated the entire temple and made various rituals.

The month of September (Purattaasi) was dedicated to the god Perumal, so I devoted myself to these gods during this month. All I ate was vegetables, but that’s not all I offered this god. To fulfill part of the ritual, I had to whip myself from 9pm till 5am the following day, using a whip with fire, which was a preparation because, during this month, I had to walk 220 miles to get to Thirupathi city, where there is one of the largest Hindu temples in India. It takes about 5 days to get there, and I also had to walk back, so it was almost a total of 450 miles.

But before traveling 220 miles by foot, I had to gather people from my neighborhood and throw a big feast, where we decorated the images of the gods and did offering rituals. One of the most difficult was to pull cars with hooks attached to my back for about 3 miles. I did all this for several years.

I had 7 Tuk Tuk (Asian tricycle) and my wife had some jewelry, but we sold everything to fulfill these very expensive rituals. I ended up having to borrow money to continue doing these rituals and became heavily indebted.

I was a spiritual leader and had 11 people as my disciples in Hinduism.

I didn’t do all these things just as zeal for my religion, but with faith that those gods would help me overcome my problems. However, during the 22 years I served Hindu gods as a priest, I lost what little I had, became indebted, besides being addicted to cigarettes. One of the most difficult moments in my life was when my children asked for a piece of bread and I didn’t have absolutely anything to give them, it was dreadful. This is when I began thinking about committing suicide. I was no longer sleeping properly, I had no peace and, by this time, I had been having an affair for 4 years. Of course, my wife did not know about anything.

I became a very aggressive person at home, I started to hit my wife, because I was cheating on her with a married woman, and thought she was doing the same to me. Every time I saw her we would argue. Because of the torture I put her through, she attempted to commit suicide.

Then, one day, my wife was invited by a group to go to the Universal Church. She went without my consent, and when I found out, I hit her and told her she wasn’t allowed to go back to that Church.  But she continued to go. One of my friends, who also attended the Church, had already invited me, but I rejected his invitations several times. One day, to try to please this friend, I decided to go with him. On the way there, already near the Church, I turned around and went back home. My friend found this strange and invited me again.

Finally, I came to the Universal Church, though I had never gone to a church, because I thought they were all the same. Until I heard the message and felt something different inside, something I had never felt before. I decided to visit more often, but it was not easy for me because I was a Hindu priest. Many thoughts invaded my head about what people would think if they knew I was attending this Church and believing in One God.

But, what I received was so strong, and I tried to continue going but hidden. Though, eventually my family ended up finding out about everything and started to persecute me. They said I was a murderer and my “friends” also began to persecute me.

I was determined because I couldn’t even sleep anymore, and I remember like it was today, the pastor called forward those who had problems such as insomnia, suicidal thoughts and spiritual problems. I went to the front of the Altar and that evening the pastor asked me what my problem was. I said that I hadn’t slept well in years, so the pastor pointed at me and said, “Tonight you will sleep like you have never slept before”, and that’s exactly what happened.

For 22 years, I hadn’t slept well due to my problems, but that night I slept very well. All I wanted was a little bit of peace, because during the 22 years I served the gods, I never knew what it was to have peace, even though I performed all sorts of rituals, the gods never granted me a little bit of peace.

The next day I was determined, I sat down with my wife and said that from that moment on we would no longer be devote to any of those gods: We were only going to follow This God called Jesus!

I continued attending the Universal Church, I began listening to and practicing the Word of God, I learned that I should leave the old life behind and this was precisely what I did. Since then, I haven’t turned to any other gods. I threw out all the gods that were in my house, and put all of those things behind me. I decided to go to the other woman’s house and told her that from then on she shouldn’t count on me for anything else because I was no longer the same man she knew. I confessed everything to my wife and she forgave me.

I was baptized in water, because I understood the message of being born again. I fought for it and when I participated in the Fast of Daniel, I was baptized with the Holy Spirit. God has restored my life and today I am very happy. The peace I yearned for during 22 years, I received soon after becoming faithful to the Lord Jesus. I am faithful to my wife and our home is a blessing.

That Venkatesh who led people to worship gods, today, is an assistant, serving One God and bringing people to the One Lord and Savior of their lives, the LORD JESUS ​​CHRIST!