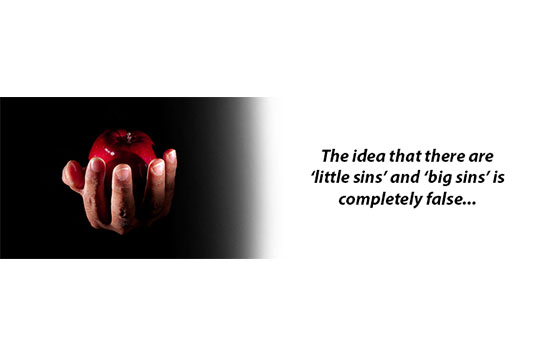 Sin is a transgression committed by man against God, and could be an act or a condition.

The idea that there are ‘little sins’ and ‘big sins’ is completely false because all sins are serious and, without repentance, can lead to condemnation in hell.

However, the way the Almighty handles each sin reveals that there are different kinds and criteria. If this were not so, the Bible would not detail these faults and their consequences.

Let’s take a look at the examples below to differentiate them better:

David’s reign was already established and he had many victories. But while the kings were with their troops in the war, he preferred to stay in the palace and rest. His idleness gave birth to adultery and the pregnancy of the wife of his most loyal soldier, Uriah.
To hide his sin, David lied, schemed and had him killed.

Uriah’s life led to the death of four of David’s children. This is same punishment he suggested the prophet Nathan apply to the “rich man who took the poor man’s lamb” (2 Samuel 12.1-7).

David gave into the temptation of the flesh and sinned. Though his repentance brought him forgiveness, it didn’t exempt him from reaping the evil he sowed. He suffered shame in the same palace terrace, was cruelly betrayed and the sword of death struck his family.

Years later, this man, who learned firsthand the consequences of disobedience, sinned again.

David ignored the instructions of the Law on the census and decided to conduct it with vain purposes. He was living a time of many personal achievements and felt exalted by them. He wanted to measure his strength and know the size of his army. Because of his pride, he ignored the fact that his victories came from the Most High.

Now sin was born in his spirit, and there would be hefty consequences. Out of three punishments, he received the permission to choose the one that would come upon Israel. That’s right! The entire nation would also suffer due to his transgression. Sin brings pain to you and to others.

David saw the Angel of the Lord kill, with a plague, seventy thousand men.

The man, who had God as his ally, now had Him as his Sentencer, bearing a sword in His hand (1 Chronicles 21.16). The heavens that poured down blessings were now pouring down death.

He turned to the Most High with a broken and repentant spirit. He obtained mercy, and the plague ceased, once he built an Altar and sacrificed. The Altar he turned away from by sinning was now the only place where he would find Salvation.

On both occasions, David found God’s forgiveness, because he truly repented. The eternal consequences of his actions were erased. However, the earthly consequences were not.

The difference between David’s two sins is that the first was committed by a weakness of the flesh, when he gave into temptation. The second was spiritual, when he trusted more in his own strength than in the Provision of God.

Opportunities to sin arise all the time, and they happen to everyone, but we must remember that sin is a rebellion against God, especially when it is committed by people who have knowledge of the Holy Scriptures.

Even if human eyes do not see it or qualify it as serious, a sin is a sin, no matter its intensity.